By 2020 the Global Smart cities market will be worth $408 billion, the UK alone will contribute up to 25% to this number. Bristol has already been named UK’s number one Smart City.

In comparison to other UK cities, Bristol has the highest digital tech turnover per person at £320,000. Bristol’s first science and tech hub, Future Space, has generated more than £2 million in its first year of activity. Meanwhile, the average number of born startups is 225 per year

Bristol is the 10th largest city by the district population. In the past, the city’s economy used to rely on the aerospace, defense, and microchip design as it created a solid base for the flourishment of the digital tech cluster. Now, it relies on freelance developers and other creative professionals. 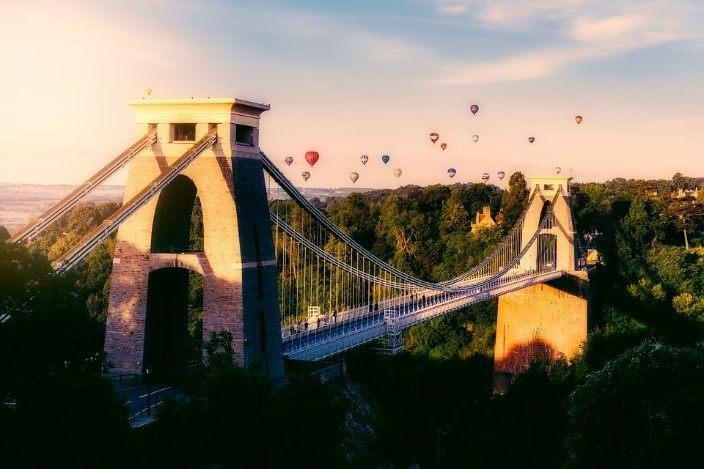 To this day, the industrial community is thriving, giants like Rolls-Royce and BAE Systems are devoted residents of the city.

Meanwhile, according to the research by the real estate advisor CBRE, Bristol is one of the top ten “superclusters” for technology alongside Zurich, Thames Valley, and Prague.

Bristol’s hubs play an important role in the development of the city tech sector. In 2013, Engine Shed, an event venue & co-working space, appeared on the city’s tech scene with the goal to grow the regional economy and create a dynamic community. Since then, around 30,000 people have visited 1,200 events and meetings every year.

Bristol is a point of attraction for young aspiring digital creatives among these 4 notable universities:

The University of Bristol, in collaboration with the University of the West of England (UWE), founded The Bristol Robotics Lab, an internally recognized center for multidisciplinary robotics research in the UK. Since its foundation in 2004, the center has united 17 research groups, 369 members and 25 incubator companies.

Economy Expansion in the Tech Cluster

Businesses like Bristol and Bath Science Park and SETsquared Partnership prove that Bristol is poised to let businesses thrive. Bristol and Bath Science Park are keen on supporting Science & Technology businesses, while SETsquared Partnership has a wide range of programs for different kind of projects (Student Enterprise, Researcher to Innovator, etc).

Their startup success rate is 43%, above the national average. South West initiative SETsquared is aimed at supporting high-tech startups. The organization provides mentoring and funding for early-stage startups.

Bristol will undoubtedly lead the UK’s smart city revolution. It has already started with the creation of Bristol Is Open, an initiative that brings R&D to the city scale.

This way, Bristol is relentlessly pursuing the development strategy. Doing so, it attracts talented freelance developers eager to work on innovative projects.

Does your mission lack a freelance developer? Contact us to share more information and we will find a perfect candidate for this position.

More on this subject: